The first Laser-61 engine ran in April 1983 following many months of research into both full size and model engines. The engine was designed by Neil Tidey, a lifetime modeller with experience in engineering and marketing.

This engine proved to be the most powerful 61 4-stroke ever produced with an output of 1.2bhp @ 14,000rpm using fuel containing 10% nitromethane. Due to the increase in power a small silencer was fitted as standard.

With the aid of a Government grant the Laser-75 and 120v twin were developed to complete the initial range of engines, AGC Sales Ltd. was formed and full production commenced in 1984. 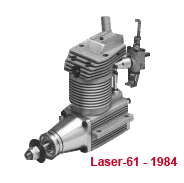 The 61 was fitted into a Chris Foss Wot-4 and flown at Sandown (At the time a major U.K. trade show). This was the first time a 4-stroke engine had been demonstrated for performance. The days when the 4-stroke engine was considered a novelty , very quiet and ideal for slow flying ‘Vintage’ type models was gone! A Laser-120v was demonstrated in a 1/4 scale Flair Triplane.

The Laser-90 and 150v twin were introduced in 1985. Brian Taylor used a Laser-75 to win the 1985 British National Championships which began the domination of Laser engines in FAI Scale competitions. A Laser-75 and a 90 were used to power the prototype 1/4 scale D B Pup and the new Chris Foss ‘Acrowot’ was powered by a Laser-75.

New CNC machinery was introduced in 1988 and the cylinder liners were manufactured from brass and chrome plated, replacing the cast iron or steel liners. For additional reliability a second piston ring was added. The Laser-45 was replaced by the Laser-50. The silencer became a one piece welded unit. Mick Reeves came 6th. in the World Championships using a Laser-180v.

In late 1989 the Laser-62 was introduced, based on the original Laser-45. The cylinder head on the 75 and 90 was modified to increase the size of the inlet valve.

The Super Tigre carburettor was fitted with a new ratchet main needle in 1990, replacing the wire type. The ‘Quiet’ silencer was developed and offered as an option on all engines. The Laser-50 was discontinued.

The Laser-150 was designed to compete with the new Japanese 120 engines. Only the aerobatic rules demanded a maximum capacity of 20cc (120), as the scale rules allowed unlimited engine capacity, power to weight ratio was more important than specific power output. The decision was made to produce a 150 single with high torque to run at 8,000 – 9,000rpm rather than 11-12,000rpm of the new 120 engines. This would result in higher reliability and ease of use. The 150 was designed and developed in 1991, the resultant engine being smaller and lighter than the existing 120 engines. The design allowed the development of a short stroke, very compact 120. The engines were fitted with a larger version of the Laser ’Quiet’ silencer.

The uprated engines incorporated the new features of the Laser-150 single. The cylinder head with hardened steel rockers, valves and collets was introduced. The carburettor and silencer fixings were changed from screws to a special clip and the glow plug was placed vertical to make connection easier. The crankcases were strengthened and fully nitride hardened high tensile steel crankshafts were introduced. The ‘Quiet’ silencer was made standard on all engines as part of our commitment to noise reduction.

The Nickel Silicon Carbide electro plated cylinder was introduced to the Laser-150 in early 1993 to reduce weight and give improved cooling. This plating is very thick and formed direct onto the aluminium eliminating the need for a brass cylinder to back the plating. Due to the high cost it was initially offered as an option but was made standard by the end of the year.

Export sales of Laser engines increased as a result of competition success and the engines were used by more top scale modellers at the World Scale Championships at Deelan in the Netherlands in 1994. The Laser-300v was introduced following development the previous year and the prototype 120 single and 240v were produced. To further improve lubrication the second ring on the Laser-150 and 300v was modified to make the ring an oil control ring. This was introduced on production engines from August 1994.

Production of the Laser 240v was commenced in 1996. This engine is exceptionally compact and has a very high power to weigh ratio. Due to the very compact size, good cooling is very important to prevent overheating.

Credit Card payment facilities were introduced and production increased to allow engines to be normally available from stock. In South Africa at the World Scale Championships 17 out of 46 competitors used Laser engines and 9 out of the first 11 placed models were Laser powered.

Laser engines powered the first three placed models in the 1999 European Scale championships and 14 out of the 32 competitors used Laser engines. In 2000, Andreas Luthi of Switzerland won the World Championships using a Laser 150.

The range of engines was updated in 2001/2 with a new cylinder head and reshaped cylinder. The single screw holding the rocker cover was replaced using 2 screws. The 4ba screws used on the cylinder head and crankcase were replaced with metric screws.

Irvine engines ceased production in the UK in 2006 and a new Laser carburettor was designed. The new main needle and jet incorporates a friction spring which is infinitely variable and supports and tensions the needle. Provision is made for an extension and the main jet and needle assembly will fit onto the Irvine carburettor as a replacement. The cam screw is hardened and the accuracy of the carburettor has been improved.

With the introduction of new CNC machinery in 2013 production has been increased and the quality and accuracy of the engines has become even better. Our policy has always been one of continuous development rather than one of bringing out new engines. Testing by flying engines in models instead of providing figures produced through bench testing.

Laser engines have powered the winning model in every UK National F4c scale championships since 2000 and over 90% of the entries put their trust in Laser power. The latest Laser engines are the best we have ever made, with quality, performance and reliability unsurpassed.